NPR did a series of stories exposing research that the U.S. government conducted during WWII. This research exposed American soldiers to mustard gas for research purposes. In some instances, the government targeted soldiers of color, believing that they had tougher/different skin that would make them more resistant to this form of chemical warfare.

Here is the whole series of stories (from the original research, exposed via Freedom of Information Act, to NPR working to find the effected veterans).

None of the soldiers ever received any special dispensation or medical care due to their involvement. Participants were not given the choice to discontinue participation without prejudice, as recalled below by one of the surviving veterans:

"We weren't told what it was," says Charlie Cavell, who was 19 when he volunteered for the program in exchange for two weeks' vacation. "Until we actually got into the process of being in that room and realized, wait a minute, we can't get out of here."

Cavell and 11 other volunteers were locked inside a gas chamber with mustard gas piping inside. Blocks of ice sat on shelves overhead with fans blowing across them to increase the humidity in the room, which intensified mustard gas's effects on the body. After an hour, the officer released six of the men back to their barracks. Cavell and five others were told to stay put.

Inside the chamber, Cavell's skin started to turn red and burn in the places where he sweat the most: between his legs, behind his neck and under his arms. Blisters that eventually increased to the size of half dollar coins started to grow in the same places. At the end of the second hour, the officer ordered Cavell back to his barracks and to continue wearing his gas-saturated uniform.

Cavell, now 88 years old, says the officer threatened him and the other test subjects: If they told anyone about their knowledge or participation in the experiments, they would receive a dishonorable discharge and be sent to military prison at Fort Leavenworth, Kan.

"They put the fear of God in just a bunch of young kids," he says.


This story illustrates why we need Institutional Review Boards. For me, at least, this story hits home because we aren't teaching our students about the horrors Nazi experimentation. Instead, we're talking about terribly racist research that the U.S. government conducted on The Greatest Generation during WWII.


Needless to say, this is a good example for a discussion about research ethics. In particular, I think this opens up discussion of whether or not informed consent can really be obtained from active duty military personnel, the importance of outside approval of research that is this potentially dangerous, and the importance of the informed consent.

Here is a link to the original study.
Posted by Jessica Hartnett at 7:23:00 AM No comments:

This obituary for Dr. Frances Oldham Kelsey that tells an important story about research ethics, pharmaceutical industries, and the importance of government oversight in the drug creation process (.pdf here).

Dr.  Kelsey was one of the first officials in the United States to notice (via data!) and raise concerns about thalidomide, the now infamous anti-nausea drug that causes terrible birth defects when administered to pregnant women. The drug was already being widely used throughout Europe, Canada, and the Middle East to treat morning sickness, but Dr. Kelsey refused to approve the drug for widespread use in the US (despite persistent efforts of Big Pharm to push the drug into the US market). Time proved Dr. Oldham Kelsey correct (clinical trials in the US went very poorly), and her persistence, data analysis, and ethics helped to limit the negative effects of the drug on American children.

I like this example because it shows that government safeguards can work and that we need data in order to provide evidence to protect public health. Also, the hero of this story is a woman...with her doctorate...in the 1960s...which makes her efforts all the more impressive.
Posted by Jessica Hartnett at 7:44:00 AM No comments:

I often share news stories that illustrate easy-to-follow, engaging research that appeals to undergraduates. For the first time, I'm also providing a mini data set that 1) mimics the original findings and 2) provides an example of ANOVA.

This story by Patty Neighmond, reporting for NPR, describes a study investigating the role of music in pain reduction. The study used three groups of kids, all recovering from surgery. The kids either 1) listened to music, 2) listened to an audio books, or 3) sat with noise-cancelling ear phones for 30 minutes. The researchers found that kids in both the music and audio book experienced pain reduction levels comparable to over-the-counter pain medication while the control group enjoyed no such benefits.

And the research used the 10-point FACES scale, allowing for a side discussion about how we collect data from humans who don't have the best vocabularies or limited communication skills.

This study can also be used as a way to explain ANOVA. The researchers didn't use ANOVA (and the data I provide below IS NOT the original data), but the original design and findings do provide us with three levels of a factor as well as some significant post-hocs.

Here is a data set generated via Richard Landers' data set generator and modified as to use a 1-10 FACES scale used in the original research (yes, the n-size is small for this design). It approximates the original findings: Statistically significant ANOVA, with post-hocs that demonstrate that Audio Book and Music conditions do not differ significantly but that participants in theses two groups report significantly less pain that the control condition.

Now, if you have the students listen to the news story first, they are going to know the results. I don't think this is a bad thing, necessarily. I think this could be used when first introducing students to ANOVA as an example with training wheels (interesting news story to listen to for four minutes followed by a statistical exercise for which they know the outcomes). Additionally, I teach statistics to a lot of non-psychology majors (nursing, pre-physical therapy, pre-physician assistant) so a medical example helps me reach those students.

This could also be used as a prompt a discussion about turning this study into a more complicated one-way ANOVA (include more levels of your factor, like 30 minutes of video games or TV) as well as how you could turn the original study into a factorial ANOVA (by including severity of surgery, length of hospital stay, age of child, etc.).
Posted by Jessica Hartnett at 7:42:00 AM No comments:

Memes pertaining to the teaching of statistics, research methods, and undergraduate advising. 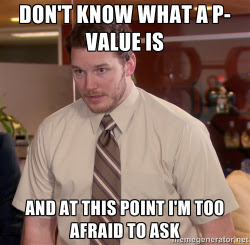 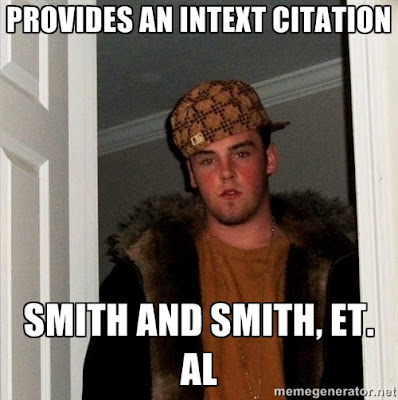 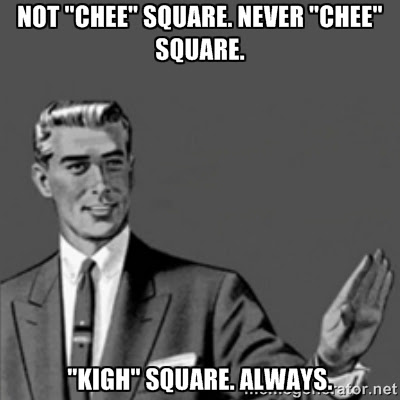 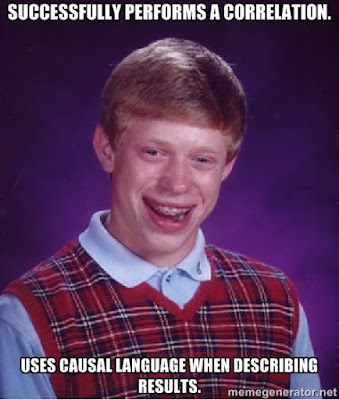 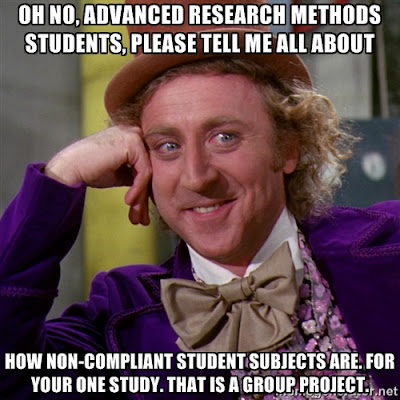 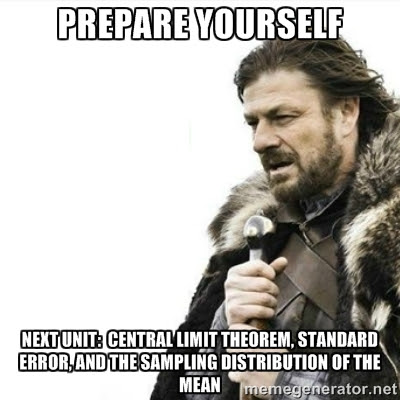 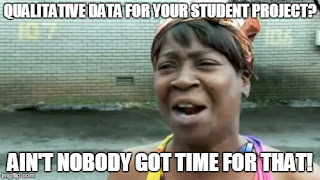 Additionally, I created a bunch of Psychology Advising memes as I am currently editing the "Advising" portion of my rank and tenure application. 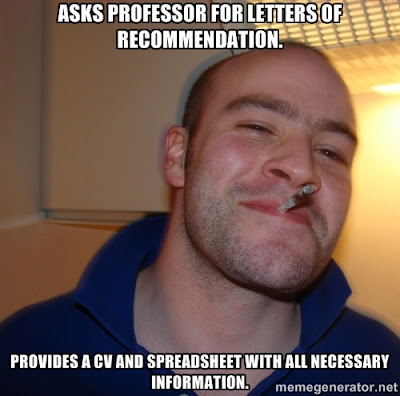 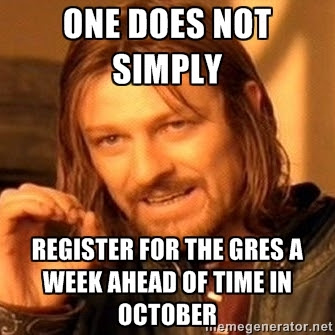 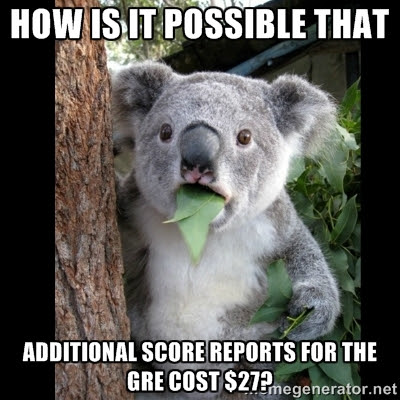 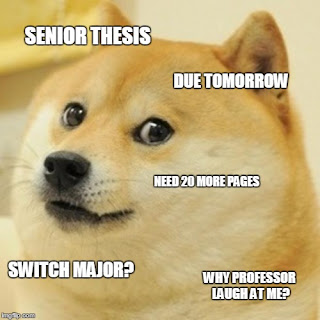 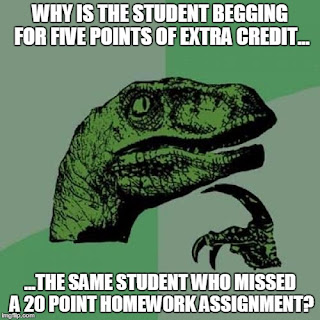 Kristopher Magnusson's "Understanding the t-distribution and its normal approximation"

This isn't the first time Kristopher's interactive tools have been featured on this blog! He has also created websites dedicated to explaining effect size, correlation, and other statistical concepts.
Posted by Jessica Hartnett at 7:13:00 AM No comments:

Aarti Shahani's "How will the next president protect our digital lives?"

I think that it is so, so important to introduce statistics students to the big picture of how data is used in their every day lives. Even with all of the material that we are charged with covering in introduction to statistics, I think it is still important to touch on topics like Big Data and Data Mining in order to emphasize to our students how ubiquitous statistics are in our lives.

In my honors section, I assign multiple readings (news stories, TED talks, NPR stories) prior to a day of discussion devoted to this topic. In my non-honors sections of statistics and my online sections, I've used electronic discussion boards to introduce the topic via news stories. I also have a manuscript in press that describes a way to introduce very basic data mining techniques in the Introduction to Statistics classroom.

That's why I think this NPR news story is worth sharing. Shahani describes and provides data (from Pew) to argue that Americans are worried about the security of their data and goes on to suggest that the federal government (in particular, our next president) need to strengthen the security surrounding our data. One option is to levy heavy fines against companies that get hacked.

She also touches on the fact that the internet and our data collection have expanded and grown far faster than our legal systems ability to keep up with it or for the free-market to generate a solution to this problem.

I like this piece because it touches on just how enormous the problem is and how many stake holders there are. I also like that the support the importance of government intervention via data that demonstrates that Americans are very concerned about the privacy of their data. 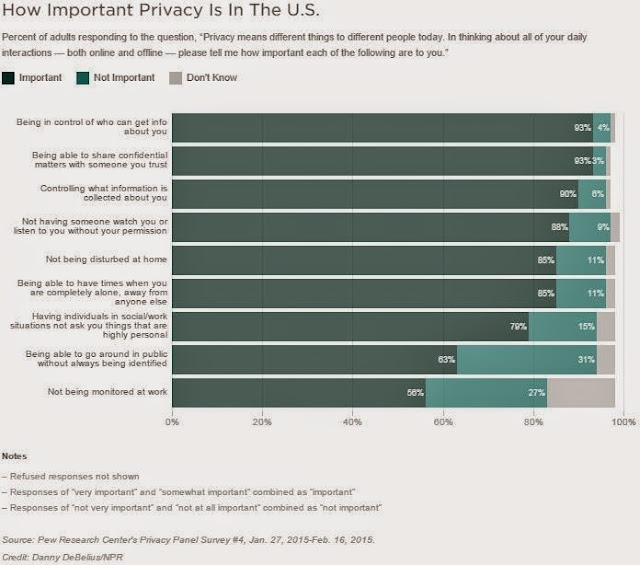