Email ThisBlogThis!Share to TwitterShare to FacebookShare to Pinterest
Labels: accessibility

Here is a whole bunch of data, searchable via Google.

American athlete Athing Mu broken the American record for the 800m. I guess you could say...that Mu is anything but average!! HAHAAAHAHAHHA.

Anyway. It is late June 2021, and my Twitter feed is filled with amazing athletes earning their spots at the Olympics. Like Sydney McLaughlin. 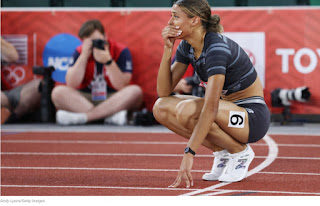 That picture was taken after McLaughlin a) qualified for the 2021 Olympics AND b) broke the 400m hurdle world record. Which is amazing.

Now, here is where I think we could explain effect size interpretation. How big was McLaughlin's lead over the previous record?

McLaughlin broke the world record by less than a second. But she broke the world record so that less than a second is a huge deal. Similarly, we may have Cohen's small-medium-large recommendations when we interpret effect sizes, but we always need to interpret an effect size within context. Does a small effect size finding explain more variance than any other previously proposed variable? Is the small effect size related to a very inexpensive and easy to administer health intervention? Is that medium effect size a sound replication of previous findings but not particularly novel? It all depends on the context, the research question, the stakes of what it is that you are studying. Similarly, Laughlin's less than second matters a lot when it comes to an elite track and field event, but probably not so much at a local 5K race.

When I teach students to interpret statistical tests, I explain NHST and effect sizes. I think it is important to emphasize the nuance of effect sizes to my junior statisticians.